Enshrinement of the Gold Statue of the Great Master

at the Place of His Ordination

For over 5,000 years, gold has been regarded as one of the most precious natural elements but also incredibly rare. In the present days, gold is utilized as monetary reserves by many countries. Characteristically, gold is highly lustrous and bright yellow in color. Its malleable nature lend way to a gamut of applications – jewelry, embroidered fabrics for royal attire, industrial appliances, electronics and communication devices just to name a few.

In honor and gratitude to a magnanimous Buddhist monk and the immense contributions he made to Buddhism, his faithful disciples have contributed to the casting of his statue made completely out of gold. However, the value of gold cannot be compared to the virtues and benevolence of the Great Master Phramongkolthepmuni (Sodh Candasaro), the vanquisher of Mara and the discoverer of the Dhammakaya Knowledge, for he had devoted his entire life tirelessly to the practice of meditation in order to discover and restore the Dhammakaya Knowledge of the Lord Buddha.

The Great Master, known by many as Luang Pu Wat Paknam Bhasicharoen, affirmed after attaining the Dhammakaya that seeing and knowing the truth was indeed possible. He compared the knowledge gained from the Dhammakaya Knowledge with the Tripitaka and various Buddhist scriptures, and discovered that it was identical and without any deviation.

Subsequently, people who later came to practice meditation and attained the Dhammakaya also discovered the same truth found in the Tripitaka, even those who were illiterate; but once the Dhammakaya is attained, everyone will arrive at the same understanding about the true objective of life – that we are all here to accumulate merit, pursue perfections and to attain nirvana. 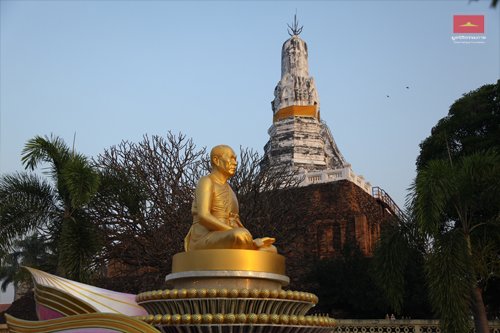 Luang Pu Wat Paknam Bhasicharoen always emphasized that each one of us shared the same point at the center of the body and everyone is equally capable of obtaining the Dhammakaya, starting by firmly stilling one’s mind because “stopping is the key to success.”

Under the leadership of Most Venerable Phrathepyanmahamuni (Luang Por Dhammajayo) – the abbot of the Dhammakaya Temple in Khlong Luang District of Pathum Thani Province – all the dedicated disciples have collectively cast a one-ton gold statue in the likeness of the Great Master Phramongkolthepmuni (Sodh Candasaro) as a demonstration of our utmost gratitude and reverence. A total of six gold statues will be cast and designated for enshrinement at each of the six important locations within the five provinces along the path of the Great Master.

In recent past, the first two ceremonies to enshrine the gold statues of the Great Master Phramongkolthepmuni (Sodh Candasaro) were held at the Memorial Hall of Phramongkolthepmuni on the land of the Great Master’s birth in Song Pi Nong of Suphan Buri; and at the Phramahacetiya Maharajamongkol Pagoda at Wat Paknam Bhasicharoen in Bangkok, the location where the initial propagation of the Dhammakaya Knowledge was established. 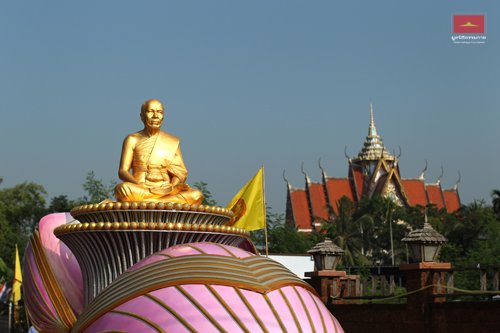 On Monday, 25th March 2013, faithful disciples and residents of Suphan Buri will be organizing an alms offering ceremony to 12,600 monks on Nenkaew Road in Suphan Buri Province, in commemoration of the third enshrinement of the gold statue of the Great Master at Wat Song Pi Nong,

In the morning (around 10 a.m.) of Tuesday, 26th March 2013, the procession of dhutanga monks will depart Wat Amphawan for its destination of Wat Song Pi Nong in Song Pi Nong District of Suphan Buri, passing Bang-Li Market along the way.

This is an auspicious opportunity for everyone who would like to offer reverence to the Great Master, as an honor to a Buddhist monk distinguished for his enormous compassion for humankind and for the greatest contribution of this century – discovering the origin and location of the most powerful point present at center point of the body (at the seventh base) of all humankind.

The exemplary teachings and examples in pursuing Perfections of the Great Master Phramongkolthepmuni, the Vanquisher of Mara, are the foundation for future generations to learn and put into practice in order to led wholesome and virtuous lives. There is an old proverb that states: “your value derives from the outcomes of your efforts.”  The value of this superb monk is demonstrated by his lifelong dedication in search for the truth of life, vanquish Mara, and propagate the method to attain the Dhammakaya to all humankind so that they may be emancipated from Mara’s grip. An individual of this caliber is deserving of reverence and admiration. The Great Master Phramongkolthepmuni had clearly shown us the way to attain the Dhammakaya; the only part that remains is Ehipassiko – which literally means to come and see and verify it for ourselves.