“Khun Yai” Chand Khonnokyoong, the fifth of nine children, was born to a middle class farming family in Nakhon Chaisri sub-district of Nakhon Pathom. Possessing great endurance and determination since she was a child, Khun Yai was the backbone of the family’s farming business until their status improved. 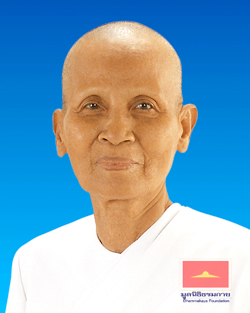 Her industrious, persevering, strong-willed, determined and firm nature enabled Khun Yai to advance quickly and proficiently in the Dhammakaya Meditation Technique, securing the confidence of the Great Abbot who entrusted her as head of the super-advanced meditation workshop and the praise “Second to None”.

The practice of cleanliness, orderliness, maintaining harmony in the working environment, and the notion of working as a team that she emphasized were principles she diligently practiced herself by utilizing the adherence of the precepts as the manner to purify one’s body, speech and mind.

Even though Khun Yai was illiterate she was full of wisdom and Dhamma knowledge, and a model teacher for all on manner in conducting oneself and in the practice of meditation. She imparted the Dhammakaya Knowledge that she gained from the Most Venerable Phra Mongkolthepmuni (Sod Candasaro) to Phra Thepyanmahamuni (Luang Por Dhammajayo), the Abbot of the Dhammakaya Temple; and carried on the Great Abbot’s goal to propagate Buddhism and the Dhammakaya Knowledge to the world.

The invaluable teachings of Khun Yai has been collected and published into numerous books such as Khun Yai in My Heart; Precepts, Meditation and Wisdom: Khun Yai’s Principles for Developing Moral Discipline; Khun Yai’s Teachings; Looking after Oneself; The Moon within the Mind; Master Nun Chand Khonnokyoong: Founder of the Dhammakaya Temple; and Being with Khun Yai.

Khun Yai is a truly virtuous friend (kalyanamitta) who is always there to guide and encourage her disciples and to dedicate her life tirelessly to the cultivation of morality regardless of one’s class, position or age. Her aim is to help people recognize the value of purifying one’s mind in accordance to the Buddha’s Teachings.

She was a teacher who willingly sacrificed herself without concern of exhaustion. She was hard working, dexterous, and deft even at her advancing age. Above all, she has the heart of a Bodhisattva who was devoted to accumulating merits and pursuing Perfections throughout her entire life. She was a significant factor and the catalyst behind the growth of the Dhammakaya Temple that we see today. All her disciples are truly grateful for her benevolence and have bestowed their depth of gratitude by respectfully honoring her as Khun Yai Ajahn Maharattana Upasika Chand Khonnokyoong. An image of her in pure gold has been cast and enshrined in the Memorial Hall of Master Nun Chand Khonnokyoong so that her disciples can come visit, pay homage, and recollect her beneficence and virtues. Each year, on the occasion of the day of Khun Yai’s passing, her loyal disciples faithfully congregate at the Dhammakaya Temple to accumulate merits and to dedicate them to “Khun Yai” Master Nun Chand Khonnokyoong, our Great Teacher.