Dhammakaya is the body of enlightenment of the Lord Buddha and “vijja” is the true knowledge; together, “vijja Dhammakaya” means the true and supreme knowledge illuminated by the Dhammakaya vision. This knowledge is the core principle of Buddhism that will lead to extinguishing of suffering and attainment of the state of supreme bliss known is Nibbana.

The term ‘Dhammakaya’ has seen increasing reference ever since the day the Most Venerable Phramongkolthepmuni (Sodh Candasaro), Luang Pu Wat Paknam Bhasicharoen, meditated and attained the body of enlightenment. This auspicious day occurred on the 15th day of the 10th waxing moon in 2460 B.E. (1917) at Wat Bode Bon in Bang Kuvieng Sub-District of Nonthaburi Province during the middle of the Most Venerable Phramongkolthepmuni’s 12th vassa, or year as a monk.

The Most Venerable Phramongkolthepmuni was born in 2427 B.E. during the era of King Rama V. In July 2449 B.E. (1906), at 22 years of age, he decided to enter the monkhood and ordain at Wat Song Pi Nong in Suphan Buri Province, with the Most Venerable Dee of Wat Pratusarn as his Preceptor.

From the very first day of his ordination onward, the Most Venerable Phramongkolthepmuni diligently practiced meditation along with studying Dhamma. Shortly, seven months into his ordination, he entered Wat Phra Chetuphonwimonmongklaram to study Pali until his 11th vassa, becoming very proficient in this ancient language. Once his goal of being able to translate the Mahasatipattarn scripture was achieved, he turned his focus to earnestly practice meditation.

Attaining the Body of Enlightenment Reflecting on what he had witnessed, he realized that attaining the Lord Buddha’s Dhamma requires one to completely still the mind. The four main responsibilities of the mind – seeing, remembering, thinking and knowing, must converge and come to a complete standstill at a single concentrated point. He would later summarize this invaluable knowledge with a simple phrase “stopping is the key to success.” Eventually, he compiled the various methods of meditation practices, from the beginning level to the advanced level, into a book called “The Abbot’s Handbook” as a reference for those interested in increasing their knowledge.

“...Behold Vasettha and Paratawacha… whether it is the word Dhammakaya or Brahma, these are names that refer to the Tathagata…”

“…any sage who is endowed with pure moral discipline [sila]…is a sage destined, in the very least, to become a Private Buddha [Paccekabuddha] who has attained numerous forms of the Dhammakaya, possesses vast Dhamma knowledge, and has a mind focused on liberation …” 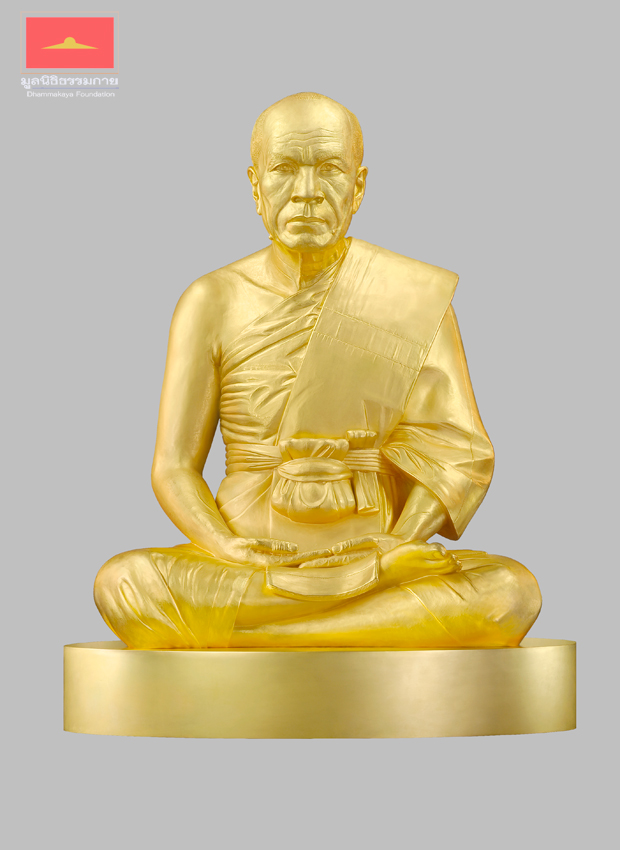 2. Wat Song Pi Nong in Song Pi Nong District of Suphan Buri Province. This is the temple where the Great Master ordained into the monkhood.

3. Wat Bode Bon in Bang Kuvieng Sub-District of Nonthaburi Province. This is the temple where the Great Master practiced meditation until he attained the Dhammakaya within.

4. Wat Bang Pla in Bang Lane District of Nakhon Phathom Province.  This is the temple that the Great Master taught meditation for the very first time and where three venerable monks and four laypersons successfully attained the Dhammakaya within.

5. Wat Paknam Bhasicharoen in Bangkok. This is the temple where the Great Master became abbot, taught and propagated meditation to a great number of venerable monks, novice monks, laymen and laywomen so that they may attain the Dhammakaya. Before the Great Master passed away, he instructed his disciples not to cremate his body but to keep it at Wat Paknam Bhasicharoen, and for them to help propagate Buddhism and Vijja Dhammakaya all over the world.

6.  Wat Phra Dhammakaya, Pathum Thani Province. This is the temple where a gold statue of the Great Master, one and a half times his actual size, has been enshrined in the Memorial Hall of Phramongkolthepmuni (Sodh Candasaro) in order for everyone to come pay respect and practice meditation. The aim of Wat Phra Dhammakaya is to disseminate Buddhism and Vijja Dhammakaya all over the world.

Thursday, 19 September 2013 (B.E. 2556) marks the 96th Anniversary of the Dhammakaya Master Day and along with the meritorious activities throughout the day there will be a special ceremony to enshrine the Gold Image of the Great Master in the Memorial Hall of Phramongkolthepmuni as a commemoration of the Great Master, his triumphant rediscovery of the Dhammakaya Knowledge, and immense contribution to Buddhism.

We would like to invite all the disciples of the Great Master Phramongkolthepmuni in Thailand and around the world to come participate in all the merit making events on the Dhammakaya Master Day and the ceremony to enshrine the Gold Image of the Great Master in the Memorial Hall of Phramongkolthepmuni. The ceremony will commence at 9.00 AM at Wat Phra Dhammakaya in Pathum Thani Province.  For more information, please visit www.dhammakaya.net and www.dmc.tv  or call 02- 831-1000.