The gentle rain that fell at the start of this month coincides with the joy and delight flowing from the hearts of Buddhists upon performing good, wholesome deeds as they congregated at the Dhammakaya Temple on Sunday, 5th August 2012, to take part in the Ceremonial Food Offering to the Lord Buddha and other great merits.

The happiness from smiles that were given freely to each other resonated in the heart and the mind for there were many special meritorious activities today – from meditating on World Meditation Day (6th August 2012); the 25th Annual Congratulatory Ceremony to recognize venerable monks who have completed Pali Level 9; ceremony to award honorific plaques and scholarships to outstanding Pali students throughout Thailand; Offerings Ceremony to the Sangha Community from more than 3,000 temples throughout Thailand; to the Ceremony to offer funds to support teachers from the four Southern provinces of Thailand.

The morning commenced at 09.30 a.m. with the Ceremonial Food Offering to the Lord Buddha as a way to pay homage to the Triple Gem, and group meditation session on World Meditation Day to bring world peace through our inner peace. 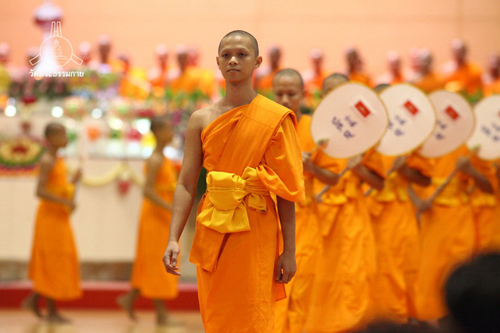 In the afternoon, the 25th Congratulatory Ceremony to recognize venerable monks who have completed Pali Level 9 began with a procession being led by the presentation of ceremonial flower bouquet and long-handle scholarship fans. 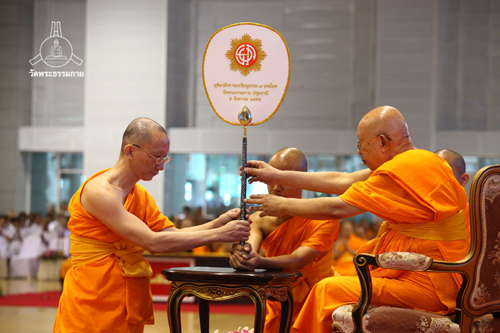 The procession of venerable monks who have completed Pali Level 9 gracefully walked to the center stage to receive their honorary gifts from the presiding monk. This was followed by a short discourse given by a venerable monk of the Dhammakaya Temple, who received his higher ordination under the Royal patronage, on the topic of ‘The Importance of Studying the Pali Language.’ The venerable monk also emphasized the importance of the dedication of the Pali scriptures scholars in being role models and the origin of merit in the continued effort to propagate Buddhism.

After the discourse was completed, two young novice monk representatives presented a heartfelt speech to acknowledge and honor venerable monks who have completed Pali Level 9. Next was the ceremony to offer honorary plaques and scholarships to outstanding students throughout Thailand. This was followed by a sermon from His Holiness Phra Visudhiwongsajahn, board of Sangha Community, Ecclesiastical Head of Region 7, vice president of the board of committee on Pali examination, and Presiding Monk for this ceremony. 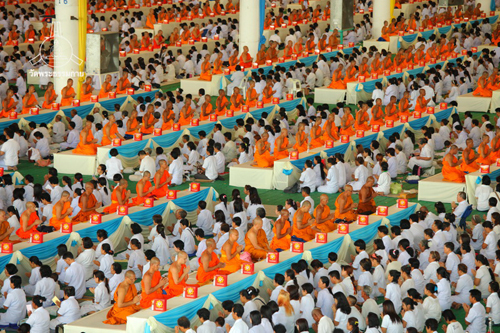 Today’s event concluded with the Offerings Ceremony to the Sangha Community from more than 3,000 temples throughout Thailand; and the ceremony to offer funds to assist teachers from the four Southern provinces of Thailand. These two ceremonies were conducted to show our support and appreciation to the monastic community and teachers who are dedicated to performing their duties. 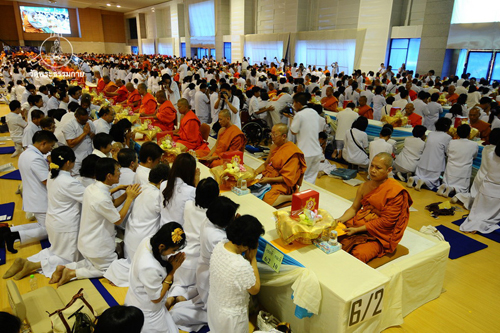 The fruits from the merits accumulated today will continue to bring unending joy, happiness and good fortune to those who performed these good, wholesome deeds as long as they keep purifying their mind, speech and action continuously. May we rejoice in everyone’s merits.